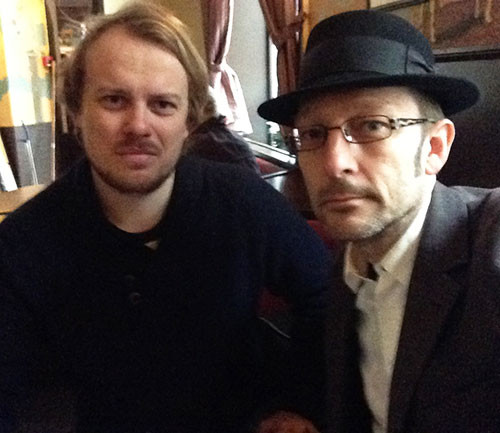 Poet Endre Ruset and Tom Roger Aadland have several things in common. Both take a strong interest in the interplay of words and music, both share an affinity for Irish culture, and both live in the area of Tøyen in the eastern part of Oslo. During the local one-day mini-festival Tøyenfest, the two had a quiet premiere of their artistic collaboration, presenting a performance that combined Aadland’s music with Ruset’s poetry. For the occasion, Ruset had written a poem containing references to Aadland’s lyrics, the poetic world of Olav H. Hauge and the ancient Nordic philosophical and spiritual text Håvamål. Not bad for a rainy, windy Saturday in April!

Says Endre Ruset about the collaboration: «Tøyen. Neighbourliness. Friendship. Artistry. Tøyen. We live in the middle of the Amazonas river of Norwegian culture, you can just let yourself drift with the flow and pick up the sounds, words and impressions. The result comes by itself.