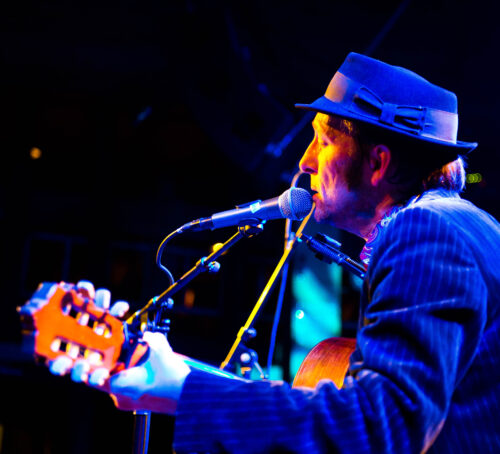 Aadland achieves the impossible
Another album with Bob Dylan in Norwegian? Is that something anybody needs? Definitely not, but then Tom Roger Aadland achieves what you wouldn’t believe was possible; to make a strong version of 50 year old “Blonde on Blonde” with Norwegian lyrics. It sounds so fresh and colourful that it calls for a tip of the hat. This artist from Haugesund has previously interpreted another of Dylan’s masterpieces in Norwegian, “Blood on the Tracks”. Since that, he’s released some great albums with his own songs. There was good reason to look forward to more of those, but this album is hardly a resting stroke. For here is both good interpretations of the lyrics, and arrangements where it simmers and bubbles in an intense musical pot. One success factor is the good, tight Norwegian language. “Just Like a Woman” becomes “Nett som ei kvinne”. So good! The other success factor is the musicians he’s brought in. Aadland himself sings with an authority and intensity that carries you away even though you’ve got a close relationship with the original. Bob Dylan of course is best as himself, but here is an artist that manages to evolve one of his classics into music that fits the time we live in. Into 2016. Just that says a lot about both Dylan and Aadland.
Rune Slyngstad, Fædrelandsvennen 5/6