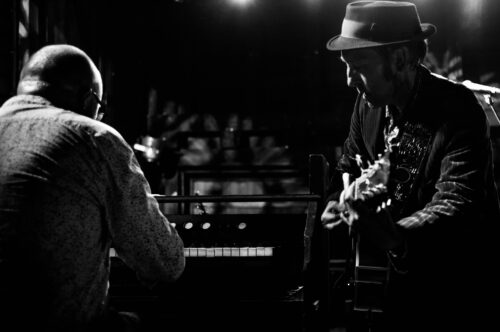 Relevant because: he has taken on Bob Dylan. The music, that is, not the man, but this might be a task just as difficult. This time it’s “Blonde on Blonde” from 1966 that has gone through the machine of restoration. The result has been given the title “Blondt i blondt”. A beautiful version of “I Want You” (“Eg må ha deg”) was released May 24, on Dylan’s 75th birthday, as a foretaste of the album. Translating Dylan’s many intricate single words and lines requires a creative mind and great patience, and Aadland has done a very good job. That he sings in Norwegian Nynorsk almost goes without saying; phrases like “eg må ha deg, nett no” wouldn’t have the same poetical resonance in Bokmål. There are many lyrical treats here that could have been mentioned, but the best thing is to listen for yourself. You can find song titles such as “Leopardskinnsbunadshetta di” and “Sorgsame kvinne ifrå Jæren” here. Some hold it against Dylan that his vocal chords sound like they’re being pressed against a razor blade when he sings. For those who are so inclined this album is perfect; here you’ll get the same good melodies, with a rough and coarse, but not as raspy a voice. One of this year’s strongest recommendations from us.
Deichman’s blog (music) (Oslo Library)