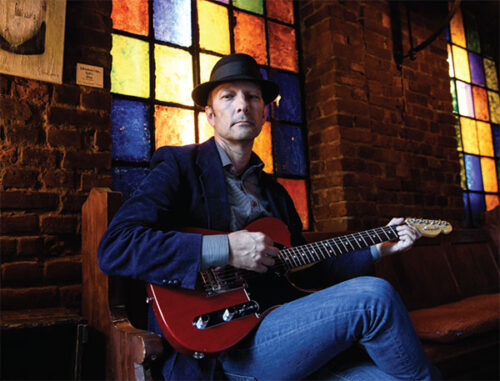 It happens next week when Tom Roger Aadland releases Blondt i blondt. Then it will be seven years since he gave out his last Dylan album, Blod på spora, which received brilliant reviews. The rock poet from the small village of Vikebygd a little north of Haugesund has long had a hearty relationship with Bob Dylan.
– There weren’t too many teenagers listening to Bob Dylan when I grew up. People my age listened mostly to Kiss and Queen, but Blonde on Blonde was one of the first records I got. Especially the last chanting, slow melody “Sad-Eyed Lady of the Lowlands” made a strong impression, Aadlands says.
On his new album the melody has got the title “Sorgsame ifrå Jæren”, and begins like this:
«Med din merkurmunn i eit misjonsmagasin
Og dine auge som røyk og dine bøner som rim
Og din sølvkross klår, og di klok¬kerøyst som skin»

DYLAN’S BEST
Tom Roger Aadland thinks Blonde on Blonde is Dylan’s best album.
– But I was aware that it’s one of the albums hardest to convey. At first I translated another album, John Wesley Harding, which is far more Old Testament. I recorded a demo, but it didn’t feel new. Not that it was an easy album to translate but Blonde on Blonde was much more difficult and exciting to take on.
– Not all of Dylan’s records are urban, but on Blonde on Blonde you find the longing for love from the urban nachspiel. I’ve been rediscovering the album as I’ve been working with the songs, and I like it even better now. I always have a main song on an album, which I have to get right. On Blood on the Tracks it was “Idiot Wind”, and this time it’s “Sad-Eyed Lady”. I sang the first version for my wife and a good friend of mine who’s a big Dylan fan. Both were very positive, and then I decided to go for it.
– How difficult is it to translate Dylan?
– Some of the songs are very challenging. Dylan is a master of rhymes, and I didn’t always feel that everything was right. I’ve worked harder with these lyrics than I did with Blod på spora. I think I have a fairly good understanding of what Dylan writes about on a deeper level. I believe I understand the Dylan universe with the bold statements, the contradictions and the depiction of the world as a fleeting place, where you shouldn’t believe you’ve caught the essence of anything at all. I think this has helped me when I’ve approached the lyrics. Largely I’ve been faithful do the original versions, and the longer I work on a song, the closer I get to the original, but there are lines where I’ve made alterations.

– There’s more love than politics on this record?
– Much of it is about love not achieved. Dylan wrote the two big love songs on the album, “I Want You” and “Sad-Eyed Lady of the Lowlands”, for his wife Sara. Even though he was newly married, he chose not to portray the great happiness. He did that on his next albums, which people found far less interesting. It’s the longing for love driving Dylan on Blonde on Blonde that distinguishes the album. It’s hard to top “Like a Rolling Stone” from Highway 61 Revisited, but still I’m more fond of Blonde on Blonde, which I find touching in another way.

WITH GREAT RESPECT
– Translating a candidate for the Nobel Prize of Literature is bold?
– Yes, and I’ve done it with great respect for Dylan’s songs. You should have very good reasons if you insert an adjective. In translations that hardly ever is a good idea. Dylan’s writing is clear, journalistic. The sentences are quite neutral, clear and sober. They have a touch of Hemingway, and there’s temperature in them.
– Have the rhymes proved difficult?
– It has been a challenge, but I’m comfortable thinking in rhymes. That’s how I write my own lyrics, and for me it would have been more difficult without the rhymes.
– What does Blonde on Blonde mean?
– I’ve read a lot about it and discovered that nobody knows. One story is that Bob Dylan told a guy to say anything that came to mind that rhymed with blonde. The man couldn’t think of anything, so he just said blonde. I’ve been thinking of tones of colour when I’ve called the album Blondt i blondt. I’m pretty sure that Bob Dylan wasn’t thinking of female blondes when he chose the album title, but I think the sound of the words was important. There isn’t a contradiction between rhyming and saying what you want. Bob Dylan has proved that many times.

JÆREN AND THE WEST COAST
It was the tour following his previous Dylan album that made Aadland start writing in Norwegian.
– I hadn’t expected so many to feel it made such a big difference that I sang in my mother’s tongue.
–Would it have been any different to sing Dylan in bokmål (the other Norwegian written language)?
– It would have been far from my dialect, and when I translate I often end up in a Norwegian west coast setting. It is a point for me to pick local names if it helps me bring the song home.
– Do you go to Dylan concerts when you get the chance?
– I do in Oslo and on the west coast, but I’m not one of those who go to 25 Dylan concerts a year. I heard him in the Concert Hall in Oslo. He played a lot of Sinatra songs and it was the finest of the ten Dylan concerts I’ve been to.
– Is Dylan as interesting as he once was?
– He is interesting in another way. His style of singing on the two so-called Sinatra records is definitely something I’d like to hear more of. Dylan’s production since he turned 60 is interesting and of a high standard. But if one should be blunt, Dylan between 1963 and 1966 plus John Wesley Harding is Dylan at his peak. Just compare what he wrote in those four years with what he wrote then next fifteen years and you can see the explosive quality. He has said himself that he doesn’t know what happened those four years.
– Will you send Bob Dylan a record?
– I’d like to send him a digital copy. I believe he has a certain interest in what happens to his songs out in the world. You have to send your translations , word by word, to Dylan’s people, but so far I haven’t had any reactions. While Dylan is usually positive to other covering his songs, Springsteen as a rule denies translations of his songs, and I know Tom Waits has stopped an album.

After the release concert in Haugesund mid-September, Tom Roger Aadland goes on a tour that will take him all over Norway, finishing up in Oslo in December.